Getting To Know: Daniel Ong! 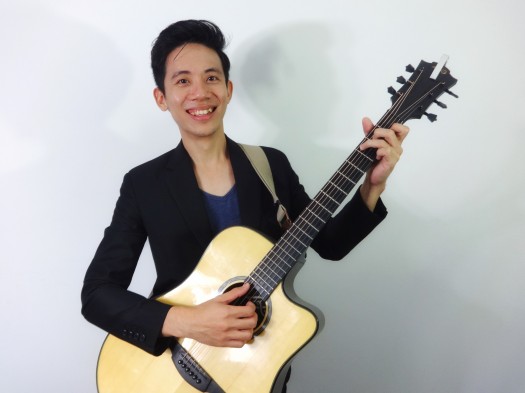 Q2: Why & How did you join Music Box?
Daniel: My wife is the niece of Music Box’s founder and she told me that Music Box is looking for a vocalist/guitarist. Her uncle was holding auditions back then. So I gave it a shot.

Q4: What do you do for leisure?
Daniel: Watch manga, movies. Loves travelling. Write songs. Have a cup of coffee. Think about life. Jams on the guitar and keyboard. Tried doing nothing occasionally but couldn’t last for more than two minutes.

Q5: Where do you usually performed/hang-out ?
Daniel: I perform at IKKI Izakaya, Metropolis, every Thurs evenings with Seow Ting. And Mr Punch (Mint Museum Bar) on Friday evenings. Accurate as of June 2016.

Q6: What is your full time occupation (if any) ?
Daniel: I’m a full-time musician as well as a full-time Physics and Mathematics Tutor. Both careers occupy different time slots if you might ask.
If you know someone who requires tuition, do contact me as well. I keep log sheets of students to track their progress and advocates the growth mindset, placing an emphasis on building good habits and character. Hahaha. Oops.

Q8: Do you have a Fanpage/Website/YouTube Channel/Instagram?
Daniel: I have a blog that is learning to be independent and socialising with other blogs on its own, devoid of the creative inputs of the original creator. I’m so proud of it. https://wassupdan.wordpress.com

Recently, a trio from Music Box started a YouTube Channel called CurryPop. As of 8 June 2016, the YouTube link looks like this: https://www.youtube.com/channel/UCt3J7o5H8hVZRnHS9SuWP5w
As we do not have 100 subscribers yet to create a customised link. Do support us by subscribing to us! Thank you!!

Q9: What is the Most Memorable Event/ Incident in Music Box you will never forget?
Daniel: This is a tough one. I guess one of the most memorable moment was fulfilling a song request for a guest AFTER a couple’s wedding. The guest requested for “Unchained Melody”, we couldn’t do it during the wedding but we recorded an unlisted YouTube video featuring Seow Ting, Wen Rong and Yu Ren and sent it to the couple.
We hoped the guest got to watch the video.

Q10: We will be surprised that you are also…..(fill in the blanks)
Daniel: A former software engineer who worked for four years and decided to pursue music.

Q11: If the world is coming to an end in 3 Days time, what will you do?
Daniel: Write a song to cheer everyone up. And hopefully all of us can sing the song at the same time. Imagine it’s kind of like a concert where you can hear the entire crowd chorusing the song.

Q12: Who do you think is the most talented in Music Box?
Daniel: Everyone is. They each have great talent in their respective domains.

Q13: Why should couples engage you?
Daniel: I’m cheerful, hardworking and put in my best effort in whatever I do! :p

Music Box is proud to be one of the few vendors in Singapore to own a pair of Bose L1 Model II Systems.

Learn more of our Premium Quality Sound Systems for your Live Band here.